How I was led to The Alliance of Divine Love 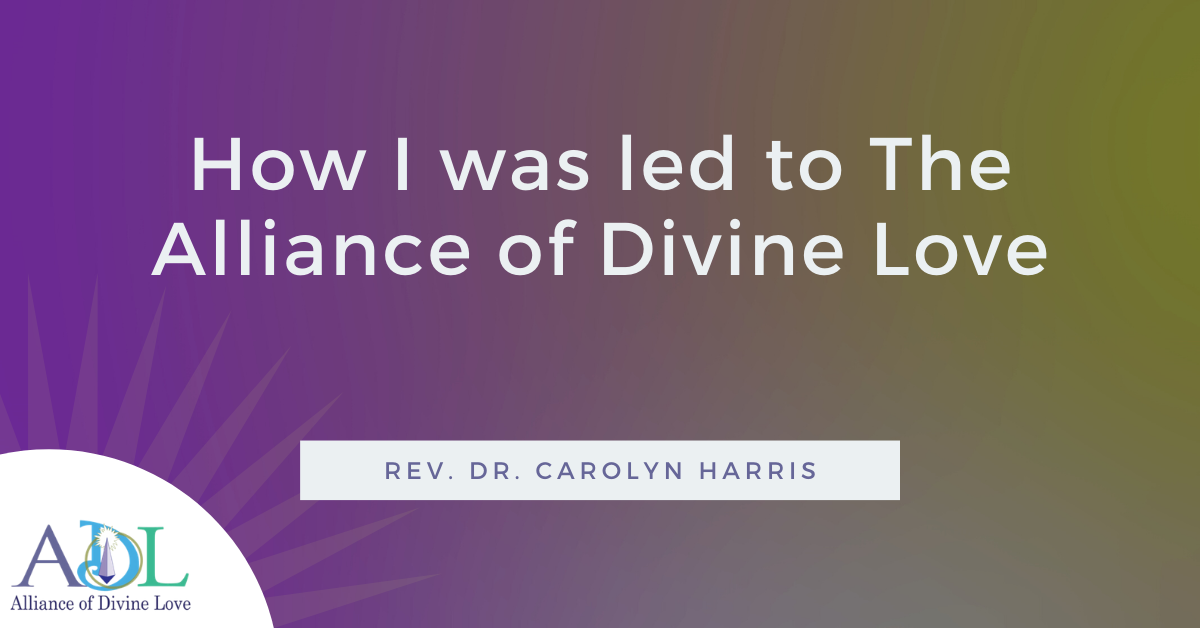 One day I received an invitation embossed with gold in the mail. I had been invited to join the Universal Spiritual Healer’s Association. Thinking I’d never heard of that, I set it aside.

When my husband Harry was going through the mail that evening, he said, “What’s this?”

And I said, “Heaven only knows. Just toss it.”

He thought I should follow up on it and at least find out what it was about. Next morning I called the number and was answered by a man named Rusty. I explained I got the card and that I had no notion of what the card was about.

He said he needed to check his records for a minute because he had forgotten. He came back on the phone and asked if I was sure it was from Universal Spiritual Healers?  I told him the letter was where I got his number.

He explained Universal Spiritual Healers was an organization where people recommended other healers to be invited to join. And then they would send their recommendations to him and he would get in contact with those who were invited. But he said, “I can’t find your name anywhere in my files.” He again asked for my address and said just a moment. He returned again and said, “Carolyn, I can find no mention of your name, address or anyone recommending you in my files.”

He began asking me what I did and how I did it with spiritual healing. I told him that I had degrees in psychology, a Masters in massage therapy, and was a graduate of the Unity School of Religion so that I could call myself a holistic therapist.

He told me I would need three character references, three healing references and three personal goals, as well as the reference. But he would be my reference.

Ever since I was a small child, I had decided it was rather ridiculous to tear a person in three parts to heal them - it all had to be connected. After visiting a little while longer, because Rusty loved to talk, I laughingly said that Harry had suggested I become a minister to keep someone from carrying me off in a white jacket.

Instead of laughing, he asked me if I would please talk to his wife, Lorraine. It seemed she was a ministerial teacher of ADL and he just knew I would be interested.

So Lorraine got on the phone and explained ADL. In a state of judgment, I said somebody had suggested I purchase a $25 license but I felt that would be a discredit to the ministry. I also wasn’t too sure about the by-mail-kind of license, being the Doubting Thomas that I am. She suggested she send me the first book and after looking through it I could make a decision about continuing.

After reading the first lesson, I knew I had found the next step on my path. I was so thrilled with my lessons, and I kept telling Harry and a couple of my friends about them. They said they’d love to do the lessons with me but they didn’t have the perseverance to do them by themselves and didn’t have the motivation to do them on their own.

Without even thinking, I said as soon as I got through the program, they could come over and we could sit around my table and I could teach them. I expressed this to Lorraine at my ordination. She told me I needed to wait a year before I could teach.

Now what would I do? I’d already promised my friends I would do this. In a few days, Barb Selwa called me. Lorraine had talked to her and she said because I had all these different degrees and was already doing healing work that she thought it would be okay if I went ahead and started teaching. She told me to call Lorraine and set it all up.

I arranged a time for one evening, called my two friends, and Harry asked if he could join, too. On the first night, just as we settled around the kitchen table, there was a knock on the door. A lady I did not know said, “I was told by Spirit to come here and take your class and I have no idea what I’m doing.”

I had no idea either, but I invited her in.

By the fourth week, I had fifteen people – way too many for my kitchen table. Not wanting too many people in a class because it would be too hard to connect with each of them, I asked if we could separate into two different classes. Seven wanted Tuesday night and eight preferred Wednesday night. I do not believe in coincidences. So Spirit was really working overtime to get it all set up.

Having never felt any desire to be a teacher, I had now found one of the most joyful experiences of my life. Now 511 classes and 1,530 hours later, ADL has become a beautiful part of my life. Each class seemed to reveal something new to me; a deeper thought, something learned from each of my students. So it’s been a most rewarding path.

The ideas and challenges brought to light by ADL are such a part of my everyday thought, I can’t remember ever having been without them. I feel so humble, blessed, and grateful that ADL became a major part of my Pathway, and I am deeply grateful for that unexplained invitation that led me to Rusty and Lorraine. Oh, and yes, I did also join Universal Spiritual Healer’s Association.

Was this written by Carolyn Harris? If so, how can I contact her? This is a marvelous story of one of the many paths the light of the Divine shines upon.

Please call the office and we'll connect you.