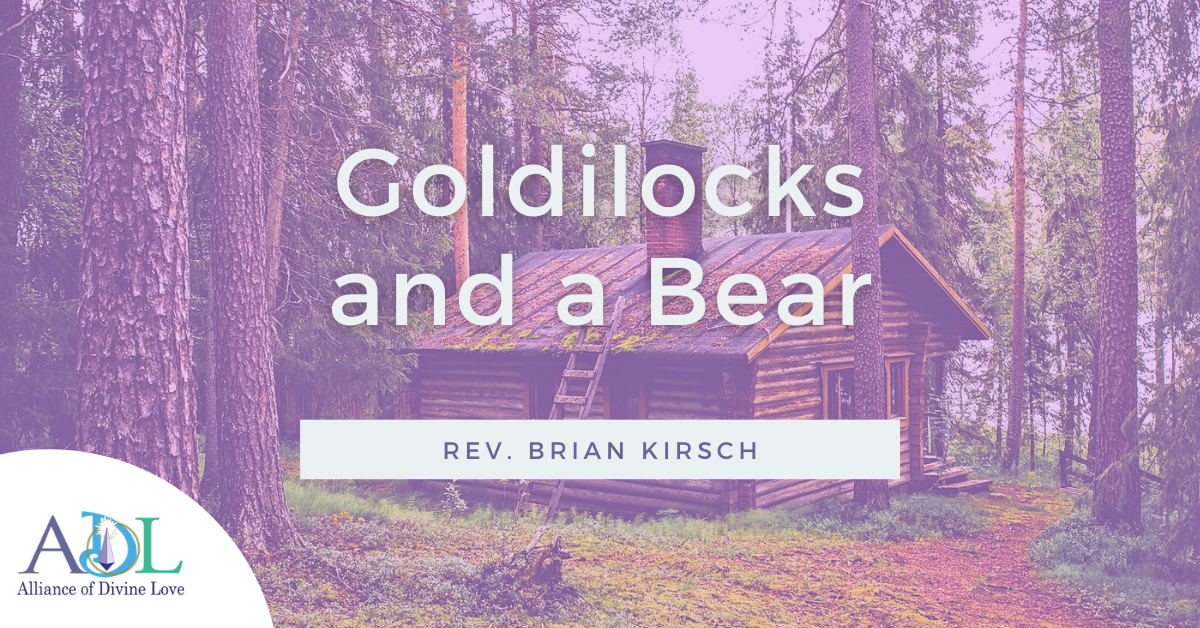 A twisted adventure of the highest degree of love

One day, a young woman (we’ll call her Goldilocks) ventured into the woods in search of a deeper meaning to life. While on her sojourn, she came upon a small cottage. She was intrigued as to why anyone would have a home in the middle of the woods. Upon turning the handle on the door, it opened. Looking in, Goldilocks noticed that there was no one home. So she let herself in.

Let’s hold the story here for a second…It seems great that the young woman (that we’re calling Goldilocks) is searching for the meaning of life (we’ll accept this as a Greatest degree of love (GDoL) thingy). But wouldn’t ya want to knock on the door first? Unless Goldilocks has this intuitive flash that tells her “break down this door and get in there pronto”, I just think there needs to be a little privacy forwarded to the owner of the cottage. Let’s proceed back to the story…

Looking around, she notices a bowl of porridge. Now we know you don’t always want to meditate on an empty stomach because your focus will keep coming back to your belly growling because it’s hungry. So, she takes it upon herself to eat all the porridge. It was an excellent mix of grains along with some blueberries mixed in. It’s time for Goldilocks to take in her moment of meditation. She, of course sits on the bed, gets in her lotus position and away she goes. Become aware of your breathing…

Well, It’s certainly heartwarming that she’s eating healthy. We’ll give her a Greatest degree of love point for that…but let’s look at the possibility that the other inhabitant is setting the scene out of hope to find a long lost love. This could be a Greatest degree of love from the inhabitant of the cottage because they want to fill a void in their heart. Give a point to the homeowner and take away the point we gave Goldilocks.
Now this part about Goldilocks sitting on the bed to meditate really gets me. Why would you go into the woods to search for the meaning of life but take yourself out of nature and stay inside?

So now we have the bear come home. After an introspective walk through the woods for a little exercise, the bear (We’ll call him Al) is ready for his porridge. It has cooled down a bit, so he thinks. “Where the heck did my porridge go!” growls Al. All of his peace from his chakra balancing walk have quickly dispersed because he’s hungry and his preparations have been dashed.

You see, Al just prepared his breakfast and had no hope for anything. There was no deep meaning to his process. We’ll still give him his point for the GDoL just out of survival. We’ll let Goldilocks keep her GDoL point too.

Suddenly, Goldilocks is jolted from her meditation, she believing that her eating the porridge didn’t satisfy her empty stomach. Much to her surprise, it wasn’t her stomach growling. It was Al. She was desperate and had to think quickly to get herself out of Al’s cottage. Then, in that very present moment, everything became crystal clear to Goldilocks!

OMG, isn’t this cool? We have an anthropomorphic bear in search for the meaning of life too! Greatest Degree of Love point for Al! Seems as if Al is a very responsible bear and lives each moment as best he can. His time efficiency deserves a gold star…cooks up porridge and while it cools, he takes the idle time to go within during his walk. He is thrown for a loop when something out of his control happened. He kicked into survival mode which motivates him to take necessary action to replace his missing breakfast. This can also be perceived as a GDoL for himself. Goldilocks is also placed in survival mode which is also perceived in a GDoL situation. Let’s get on with this story. It’s getting interesting!

If Goldilocks jumps out the window to avoid Al, she misses out on the opportunity to open communication. If Al eats Goldilocks, he could satisfy his hunger. Al is jolted with inspiration and is motivated to take the high road. He wants to hear Goldilocks story so that maybe he can learn to avoid the same kind of situation in the future.

It seems that this is where it all comes together.

The reason Goldilocks was venturing into this neck of the woods was because the previous day, she ran into a Mama bear (we’ll call her Martha) along with her cub (Ray). Goldilocks was blown away with her awareness that she could communicate with bears. Goldilocks learned from Martha that over a year ago, while on an outing, a car startled Martha’s family while they were crossing the road. Her husband (Martha called him Al!) had fallen down an embankment, while Martha and Ray ran the other way. The bears desperately searched for each other, but to no avail.

Now, at Al’s house, we have Goldilocks sharing her story of running into Martha and Ray. Al shares his side of the story about falling down the embankment. It’s at this moment in time, Al and Goldilocks realize that the whole scenario was an event set up so they could both practice the Greatest Degree of Love. Goldilocks brought Al over to the place where she met Martha and Ray and the world, they say, became a better place.

Que the parting music and fade out the scene.

It is during this time while the credits are scrolling that we hear about how Al, Martha and Ray invite Goldilocks over to their house for porridge. Goldilocks brings over two chairs, one of them was to replace Ray’s chair that she broke while trying to sit in it, and the other chair for herself. They brainstorm a bit and decide to write a book about their experience. Of course they change parts of the story. …and the rest is history.

Absolutely wonderful! What a great writer you are! Loved it! Thanks so much for sharing that!

Brian your story made me smile. Thank you!!! It is a happy way to start my day.

I think this is a fabulous Metaphor clear message wonerful for our times and includes humor! I would love to hae a printed copy!

Gloria, if you hover over all of the text, and then right click, it should give you a option to print it.

And now Goldilocks and Al have a TicToc account with 200,000 followers and Quaker Oats is their sponsor.